Originally posted: May 2, 2016 by Jamison Faught in Muskogee Politico

With the re-birth of the Oklahoma Libertarian Party, I’ve worked up a new voter registration map.

After the Oklahoma Libertarian Party was officially recognized on March 21st and before the March 31st voter registration cutoff for the June primary, Libertarian voters registered in 55 of Oklahoma’s 77 counties. There are now 651 OLP members, or 0.033% of all registered voters in Oklahoma. 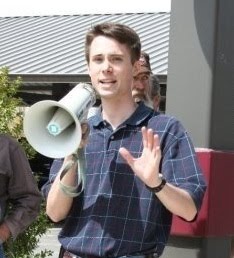 About Jamison Faught
MuskogeePolitico.com is operated by blogger Jamison Faught, and was started on July 31st 2008. Faught is a lifelong Muskogee resident, and is a homeschool graduate. He and his wife Kristen have one daughter Carmen, born in July of 2015. On the political side, Faught has volunteered on numerous campaigns, served as the chairman and organizer of the Muskogee Tea Party, and has been involved in both the Muskogee County Republican Party and the Oklahoma Republican Party for almost a decade. U.S. Sen. Tom Coburn (R-Muskogee) was the doctor who delivered him at birth (one could say Jamison was "doomed" from his first breath to become involved to some degree in politics), and his father (George Faught) has served four terms as the first Republican state representative in House District 14. See more of his work via Muskogee Politico