Many people I talk to seem to think American foreign policy has something to do with democracy, human rights, national security, or maybe terrorism or freedom, or niceness, or something. It is a curious belief, Washington being interested in all of them. Other people are simply puzzled, seeing no pattern in America’s international behavior. Really, the explanation is simple.

Influential US Senator and 2016 presidential candidate Marco Rubio has tweeted a blatant death threat and incitement of violence against Venezuelan president Nicolás Maduro. As of this writing the post has 13 thousand shares and counting.

The tweet consists of a “before” and “after” photo of former Libyan leader Muammar Gaddafi, who in 2011 was mutilated to death in the streets following a US-led NATO intervention in Libya which was launched on false humanitarian pretexts. The first photo depicts Gaddafi alive and confident with a smile on his face, the second depicts him covered in blood following his capture by a militia group minutes before his death.

Pundits like Max Boot and Bill Kristol got everything after 9/11 wrong but are still considered “experts.”

One thing that every late-stage ruling class has in common is a high tolerance for mediocrity. Standards decline, the edges fray, but nobody in charge seems to notice. They’re happy in their sinecures and getting richer. In a culture like this, there’s no penalty for being wrong. The talentless prosper, rising inexorably toward positions of greater power, and breaking things along the way. It happened to the Ottomans. Max Boot is living proof that it’s happening in America.

Well, now we all know what happens when a public official criticizes AIPAC. And of course, that was the whole idea.

The late antiwar conservative congressman showed what might have been for the post-Bush GOP.

Walter Jones traveled a path familiar to many of his countrymen. After the slaughter of thousands of Americans in the 9/11 terrorist attacks, the Republican congressman from North Carolina wanted to fight back. Representing a military-heavy district, he knew the bravery and patriotism of our men and women in uniform.

I wanted to write an obituary for a friend who I would go down to Capitol Hill to see — Walter Jones. He was a Republican but someone who would vote based upon what he believed was right and not simply because of party politics. Walter died and it was really a great loss. He would cross the aisle and often work with Democrats, and as a result, he won their respect. The same could not be said of some of the Republicans like Boehner.

The System Would Love Tulsi Gabbard; But She Is Anti-War

But on the crucial issue of foreign policy she’s a dissenter. And, from what I can figure out, this dissension comes from a principled position. 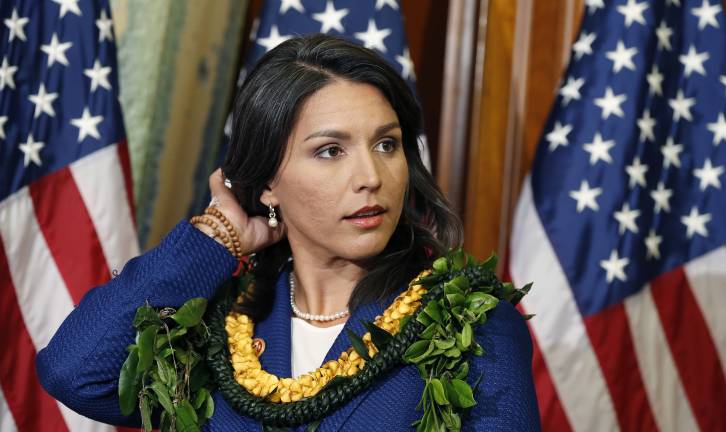 And that makes her persona non grata in the current political climate of partisanship.

The White Helmets, “volunteers” who reportedly “rescue Syrians from rubble.” Never in history has such a group been so feted by the elite, or received so many awards from institutions acting as extensions of US and UK hegemony.

A recent panel at the UN Security Council in New York revealed the shocking evidence of White Helmet involvement in organ trafficking in Syria. The lucrative trade of human body parts, bones, blood and organs is one of the most protected and hidden harvests of war.