(Rick’s words are in black; Jenese’s words are in blue.  I’m not sure we should still be reminding you.  You’re smart people.)On Monday we were looking forward to wending our way to Corinth.  After breakfast, Rick began calling for car r… 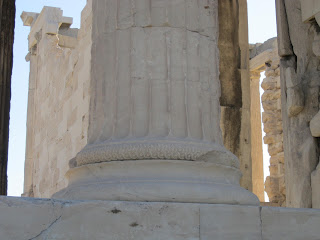 The complimentary breakfast at the Hotel Apollo was a step down from the buffet we enjoyed at the Hotel Princess Flora, but was still quite satisfying.  It consisted of scrambled eggs, (processed) ham slices, cheese slices, yogurt, honey, tea, and coffee — all enjoyed with the ambiance that comes from 80’s rock music pumped through the recessed speakers in the ceiling.  I also noticed there were no persnickety waiters.

This was our most typical tourist day.  Although the Acropolis was within eyesight of the hotel, we took the metro to the Acropolis stop, knowing that our day would be filled with walking.  (Don’t worry, blog fans.  We’re gonna make up for that indulgence on Day Eight.  Trust me.)  We emerged from the metro on the southeast end of the Acropolis hill.  We walked westward along a wide, cobblestone pedestrian avenue, not knowing the location of the entrance and ticket booth.  From somewhere on our left, we could hear chanting from a Sunday morning Greek Orthodox service.

Nearing the west end of the foot of the Acropolis, we followed a trickle of tourists heading up some steps into a wooded park.  At the top of the steps, the trickle became a throng.  Our blind wandering had taken us to the ticket booth.

We purchased all-inclusive tickets, which provide admittance to a number of the archaeological sites in Athens, and proceeded to the entrance.  People were streaming in, but we had arrived early enough so that there was no line.

We had with us a borrowed iPhone on which I had uploaded free audio guides by Rick Steves.  I started the one for the Acropolis.  I had also brought my Sony MP3 player, thinking one of us could listen to it while the other listened to the iPhone, but it turned out that my MP3 player is so ancient that it would not play the audio format of the podcast.  So, we relied solely on the iPhone with the speaker on and the volume maxed out.  This garnered a lot of looks from other tourists, but Rick Steves wasn’t as loud as all the tour guides who were scattered about.

Envy Plucking the Wings of FameBeginning in December, I will be teaching a 12-week class on the sin of envy on Sunday mornings at Adams Blvd. Church of Christ.  The following is a class description, as well as a bibliography listing the source mat…

Today’s haul from the Bountiful Baskets food co-op. Eating 25 pounds of Clementine tangerines will be a challenge.

To return to Greece . . .(Jenese’s words are still in blue, and Rick’s are still in black.)Our final day on Rhodes dawned to find us once again sticky and in need of cooler air.  After breakfast, we loaded the car, turned in our room key, and set …

I apologize for interrupting the Greek travelogue, but as an attorney, and as someone who really doesn’t like to be tortured, I can’t resist commenting on the ruling issued this week by the full 7th U.S. Circuit Court of Appeals in Donald Vance and Ethan Ertel v. Donald Rumsfeld and United States of America.  You can read a summary of the facts and the ruling here.  CBS does not bother to provide a link to the court opinion being reported on, but you can find it here.

This is yet another stunning torture decision from our federal courts.

Two employees (U.S. citizens) working for a U.S. contractor in Iraq became aware of an on-going gun running operation.  Their company was smuggling liquor into Iraq, where it was then traded to U.S. military personnel in exchange for guns and ammo.  The guns and ammo were then being sold on the black market.  The two employees, Vance and Ertel reported this to the FBI.  In retaliation, the company fired them and revoked their papers.  The U.S. military then arrested them, accusing them of being the illegal arms dealers.
They were classified as “security internees” and held in isolation.  They were brought before a Detainee Status Board where they were accused of crimes, but not allowed to present evidence.  The Board refused to contact the FBI agents who were working with Vance and Ertel and could have confirmed their version of events.

The Board determined that Ertel should be released, but he continued to be held and tortured for another 18 days.  Vance was held even longer. Vance and Ertel sued the U.S., Rumsfeld, the soldiers doing the torturing, and everyone else in the chain of command.  The 7th Circuit framed the issued as whether it is appropriate to create a private right of action for damages against those in the military chain of command.  They determined that the answer is no.

I’m sure that the way this decision will be reported is that Rumsfeld can’t be held personally liable for the bad conduct of troops overseas.  But reading the court’s opinion, you’ll see that the implications are much greater than that.  Effectively, the court determines that the military can torture U.S. citizens overseas and there is no remedy, other than to apply for a discretionary award from a fund for injuries caused by the U.S. military.  I’m not convinced that Rumsfeld should be held personally liable for the torture suffered by these two individuals, but the reasoning of the court, excusing the torture of U.S. citizens, should frighten all of us.
Here’s some of what I found disturbing in the court’s opinion:

1.  The court noted that “it is unsettled” whether the U.S. Constitution applies to torture that occurs outside of U.S. territory.

2.  Neither the Detainee Treatment Act, nor any other statute, gives a right of action against soldiers and their immediate commanders for torture.  Therefore, any right of action would have to be judicially created, like a Bivens action.  (In Bivens, the Supreme Court ruled that an implied cause of action existed for an individual whose Fourth Amendment freedom from unreasonable search and seizures had been violated by federal agents. The victim of such a deprivation could sue for the violation of the Amendment itself, despite the lack of any federal statute authorizing such a suit.)

3.  The court notes that past decisions have determined that it is inappropriate that soldiers be able to seek damages from their commanders.  Vance and Ertel are not soldiers, but the court said that they can be thought of as soldiers since they are working in a combat zone and performing some of the same functions.

4.  The Administrative Procedures Act bars courts from reviewing military authority exercised in the field in time of war.  (On this basis, the U.S. asked that the suit be dismissed.  In other words, the U.S. government (under Obama) took the position that so long as the war on terror is on-going, the U.S. military can torture U.S. citizens overseas.

5.  The Torture Victim Protection Act and the Alien Tort Act offer authorizes the award of damages for torture done to non-citizens, but they offer no remedy to citizens.


6.  . “The Attorney General supervises thousands of FBI and DEA agents, thousands of prison guards,  and so on. Many exceed their authority. People able to  exert domination over others often abuse that power; it is a part of human nature that is very difficult to control.”  While this might be an argument against holding an agency director vicariously liable for the bad act of his underlings, the court implicitly uses this reasoning to give a sort of immunity to the torturers themselves.

If a victim of torture  by the Syrian military can find his torturer in the United States, U.S. law provides a civil38 Nos. 10-1687 & 10-2442 remedy against the torturer. Torture Victim ProtectionAct of 1991, 28 U.S.C. § 1350 note. If the victim is killed, the same U.S. law provides his survivors a civil remedy. The same could be  said for victims  of torture by  any other government in  the world  — any  other, that is, except one. Under the  majority’s decision, civilian U.S. citizens who are tortured or worse by our own military  have  no  such  remedy. That  disparity  attributes to  our  government and to our legal system a  degree of hypocrisy that is breathtaking

I don’t disagree with the majority’s holding as to the specific question of whether Rumsfeld can be held liable in civil court for the torture that occurred to these plaintiffs, but I’m disturbed by the overall attitude of the court, which is dismissive of the torture that occurred — refusing to even use the word — as well as being very vague as to whether the torturers themselves can be held liable in civil court.  The court seems to be saying that if you don’t like being tortured, you can apply for an award from the compensation fund or write to your congressman.

(Jenese’s words are in blue; Rick’s words are in black.)The night was a bit sticky.  With only a sliding glass door to the balcony, we had no cross breeze to moderate the temperature.  It was a relief to walk to the breakfast buffet, and feel…