Today, a group of Oklahoma lawmakers wrote an open letter to Gov. Kevin Stitt; asking him to sign an edict to all Oklahoma employers, forbidding them to mandate certain vaccines for all employees.  At last count, 20  lawmakers signed the letter. It seeks to block a Sept. 30th mandate from some of the state’s largest medical facilities.​  The rationale is that perhaps thousands of workers could be fired for failing to prove vaccination reco […] 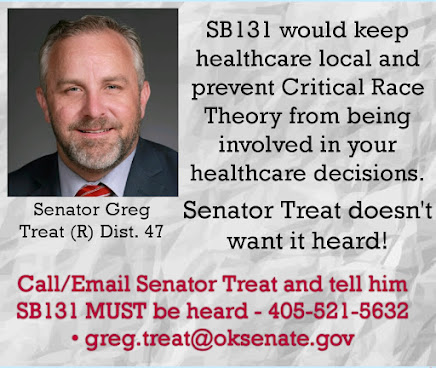 As with so many things today – even in this ‘red’ state of Oklahoma – out-of-state interests and legislators who simply aren’t conservatives have caused a problem for EVERYONE in the state.
The problem stems from the fact that out-of-state interests spent millions of dollars last June to BARELY pass State Question 802 which expanded Medicare in Oklahoma.
Unfortunately, the RFPs for the contracts for these services are FULL OF Critical Race Theory language that sidestep our abortion laws (that are much more stringent than the federal) AND out source SoonerCare services to out-of-state Managed Care Organizations.

Dr. Shannon Grimes will be leading a discussion and sharing information and ideas regarding Free Market Health Care. Thursday November 2nd at 6 pm Please join us in the private dining room for great tex mex and conversation! Chimi’s Mexican Food …

Conservative commentator Ann Coulter lambasted Senate Republicans Tuesday over the unpopular GOP Senate healthcare bill — warning that it will merely transfer ownership of ObamaCare from the Democrats to Republicans.

Sen. Rand Paul, R-Ky., one of five Republicans who has said he would vote against the the Senate healthcare reform bill, said Sunday he would change his stance if the White House and GOP leadership changed its approach.

Graphic credit: Created by Shelli Dawdy of Grassroots in Nebraska

House Passes Bill To Dismantle ObamaCare.    Congressman Jim Bridenstine called into Tulsa morning talk radio, today, to share some thoughts on the congressional issues being discussed in Washington, this week.  Bridenstine admitted that he was wrong last month, when he declared that the leadership’s healthcare reform bill was “the best we can get at this time”.  He commended his friends and colleagues in the House Freedom Caucus (a group he helped establish a few years […]