Join the online grassroots community to be a part of this effort and more here. Continue reading →

Here is the text of the resolution submitted to the OK County GOP ExecComm on Open Government. It has been submitted for electronic vote, with Friday, 5pm deadline. It is not official yet. I encourage everyone to adopt it at your counties and send on the the legislators. They should NOT take us for granted any longer. Continue reading →

The US is considering the option of military action against Syria. The alleged use of chemical weapons (CW) by the Syrian government, which is not backed by any solid evidence, is to serve as the pretext. Syrian President Assad is going to be “punished.” On March 6, US President Trump and Israeli PM Netanyahu discussed the threat posed by Iran’s presence in Syria and ways to counter it.

It’s a program so effective that other states are seeking to copy it. It was featured on the local news last week as News 9’s Alex Cameron took his cameras inside the headquarters of Oklahoma’s new, unified IT entity. Cameron’s story, entitled “Keeping the State of Oklahoma Secure Against a Cyber Attack,” captured footage from the state data center and one of its situational awareness centers.

The story features footage from the center’s real-time network monitor, a big board straight out of the movie War Games, which tracks potentially hostile incoming Internet traffic from sources around the world. Cameron’s footage showed the foreign probes, in real time, while they actually occurred. 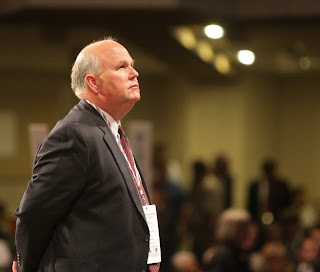 Gary Jones recently stepped in & rescued the OKGOP 2015 Convention from a near collapse, when the organization’s systems shut down the process on a 5 hour delay, with no credentialing solution.

State Auditor, and former OKGOP Chairman, Gary Jones, is focusing significant efforts to improving the efficiency of the state government in his beloved state of Oklahoma. Some of that significant effort is now turned to communicating these ideas with his thoughtful fellow citizens.

“If you look at it from a business standpoint, what we’re doing now makes absolutely no sense.”

My real life experience as a rancher, oil-field worker, and roust about has helped to define the importance of common sense and good judgment in everyday life. “Your VOTE will count tomorrow, Tuesday, August 26th in the runoff! Continue reading →

Governor Perry, with all due respect, you have used great rhetoric. But you will have to answer to the voters of Iowa, New Hampshire, South Carolina, and across the country as to why that rhetoric does not match your record Continue reading →