The packets are organized into 2 sections. The first section is for the County Chairman and is numbered as County Chairman’s Page 1-10. These pages are information for you to organize your meetings and convention. There is a CALENDAR OF EVENTS for deadlines as well as the State’s activities through the State Convention. Please keep the list of contact information for help with your meetings and convention. 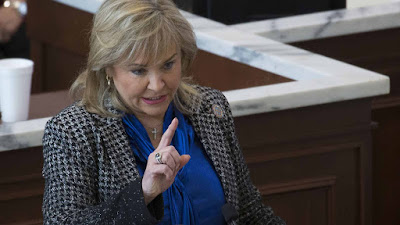 Here is an anecdote that perfectly exemplifies the state of play within the modern day Republican Party.

Another Republican has stepped up to offer his leadership for the vacated office of OKGOP Vice Chairman.  Porter Davis has been an active GOP leader since the early 1980s. He emphasizes local and precinct party activism, constitutional reforms, and policies which reflect the liberties espoused in our nation’s founding documents.

The full thesis of Mr. Davis’ candidacy is well worth reading and we encourage everyone to study it. Find it here.

The OKGOP has run up about a $45K debt in the past 3 months.

After getting out to a great start in financial recovery from the Weston debt, Chairman Randy Brogdon hit a ‘snag’ this summer in fundraising. Internal strife only added to the financial woes. Governor Fallin and many other state leaders have only offered armchair criticism, and the primary funding for party operations fell upon Tea Party activists to provide.

One wealthy Tulsa businessman told me he was dropping his Elephant Club membership because “the damn tea party took over!”. I mentioned that the Tea Party has always been very active in the party; but he insisted that something akin to a terrorist coup is now running the OKGOP.  Now, this businessman has not been to any party conventions. Most of the wealthy party operatives seem to disdain mixing with the commoners. And that is sad. It is the result of some divisive operatives deliberately executing a whisper campaign of fear.

Someone is trying to divide and dismantle the OKGOP

Two of the three announced candidates for OKGOP Chairman have published their “vision statement for the office they are seeking.

Robert Hubbard and Pam Pollard  have publicly posted their ‘vision’ statements. Estela Hernandez did not appear to have produced any such press statement of the kind.  We are posting the two public statements as an effort to educate the entire OKGOP membership of the options which the State Committee will be asked to choose from. The Oklahoma Republican Party has the opportunity and the responsibility to be the leader this nation needs at this moment in time.

It is evident by watching our current candidates for president that We the People are tired o the lip service and show votes by those who claim to be Republicans. Our party platform is extremely clear, and yet some have changed it for self-promotion into two words – “situation ethics.”

As I have traveled the state, it is easy to see that the OKGOP is full of hard-working, dedicated people who want to make a difference. Our work for 2016 is to elect men and women who will set a high standard of integrity congruent with the party ideals. If the Republican Party fails to represent the values of the Republican voters, then we have failed.

All of us, working together, will continue to make a difference!

The Detestable Act of Abortion Shows Insight on our Nation

Anyone who is a dog owner has had that moment when they catch their dog drinking from the toilet bowl.  Upon admonishment, the dog gives you a quizzical look that says, “Is something wrong”?

Perhaps it is an unfair comparison, and it is obviously not even in the league with things that go on in society, but it does convey the analogy that people often become so desensitized to detestable things that they not only don’t detect that their behavior is wrong, but fully believe that absolutely wrong is absolutely right.

We have seen this repeatedly during human history, case after case of man’s inhumanity to man, where one man no longer perceives another man as a human being, and thus feels no shame or remorse at the mistreatment of his counterpart.

Of course, the most prevalent example of this is one that took place during the lifetime of some of our oldest living citizens, Adolph Hitler and Germany. An acquaintance of mine who grew up in Germany during Hitler’s rise to power said that he was seen as someone who was going to save his or her nation.  At tht time Germany had suffered a humiliating defeat at the end of World War I, and was in a deep depression, both financially and mentally.

Read the rest of the Tulsa Beacon Article here

Randy W. Bright, AIA, NCARB, is an architect who specializes in church and church-related projects. You may contact him at 918-582-3972, rwbrightchurcharch@sbcglobal.net or www.churcharchitect.net. ©2014 Randy W. Bright  Previous articles written by the author are available for reading at his website.