Have you heard the news? We just scored a huge victory for the 2nd Amendment here in Oklahoma.

The Oklahoma legislature passed my Senate Bill 1212 known as Constitutional Carry, guaranteeing every law-abiding Oklahoman has the ability to defend themselves without the burden of a government-issued license.

I believe the 2nd Amendment and the right to self-defense is fundamental. That’s why I proudly lead the charge to secure your rights and passed Constitutional Carry.

Click on the headline link to continue reading via OKGrassroots

Many have inquired when they would be able to sign the Voter Referendum Petition to give the people of Oklahoma the opportunity to reject or retain the largest wealth redistribution tax increase  passed in Oklahoma history  (half a billion dollars) by the State Legislature and Governor.  The moment has arrived and below is the press release from Oklahoma Taxpayers Unite!

Click on headline link to continue reading via OKGrassroots

It’s confirmed Dan Fisher will be coming to Bartlesville on March 11th. He will be preaching at Calvary Chapel Bartlesville at 10:30AM with a day full of events to follow. Don’t miss out on this opportunity to hear Dan speak and rally to the cause. This is no time to grow faint. We have 20 weeks until the election, there is still time for the bride of Christ to stop abortion and participate in this move of God. Please share with all your friends and family, engage your neighbors, gather all the volunteers you can and meet at Calvary Chapel Sunday morning March 11th at 10:30am.

Paul Cason announced today that he will be a legislative candidate for the Republican
nomination in House District 83.

“Oklahoma is facing tough times, and it is crucial that we have principled conservative leaders in office to guide our government,” Cason said. “As an attorney who works with businesses every day, I have helped Oklahomans overcome tough legal issues. As a lawmaker, I will use that same expertise to guide policy decisions.”

District incumbent Randy McDaniel, a Republican, is leaving office due to term limits. “It is time to stop talking about the major issues confronting Oklahoma and start working toward achieving some tangible results,” Cason said.

Cason has long been active in Republican politics, having served as a staff assistant to U.S. Sen. James Inhofe and as a field director in Alaska for the Republican National Committee during the 2014 election cycle. Cason interned in 2013 with then-Congressman James Lankford.

He earned his undergraduate degree from Purdue University where he studied History and Political Science. While at Purdue, Cason was involved in the Reserve Officers’ Training Corps (ROTC) and held several leadership roles. He earned a Juris Doctorate from the Oklahoma City University School of Law.

Cason is currently a partner with the Rosell Law Group, focusing on business and estate issues.

“To grow Oklahoma’s economy and create jobs, we need to elect legislators who understand how rules and regulations impact the private sector,” Cason said. “My mission as State Representative will be to focus Oklahoma government on its core duties and otherwise streamline and eliminate regulation whenever possible.”

Cason, 32, serves on the Infant Crisis Services Young Professionals Board. He attends All Souls Episcopal Church.

On Saturday September 7th, during a special meeting of the Executive Committee, the Libertarian Party of Oklahoma voted to allow only registered Libertarians to select the party’s candidates. All Libertarians currently registered as Independent should re-register in order to vote in the party primaries.

As of today, there are three gubernatorial candidates competing in the Libertarian primary to be held on June 26, 2018 with a runoff election on August 28, 2018. Indications predict primaries necessary for other races as well. All registered voters will be able to vote for the winning Libertarian candidates during the general election, on November 6, 2018.

Over the past several months, party members have been weighing the merits of both the open primary and closed primary options. Through the sponsorship of panel discussions and education events, the party has used participation in the decision making process as a positive way of engaging the community and energizing membership.

Immediately after the vote, party leaders expressed a renewed commitment to advancing party objectives and continuing to take advantage of the tremendous positive momentum currently being experienced.

“Decisions like this and others are welcome indications of growth for us. Going forward we will concentrate on the recruitment of candidates and making sure Oklahomans know we’re here. These are exciting times. There is another choice when it comes to the political direction of Oklahoma’s future,” said Libertarian Party Chair, Tina Kelly 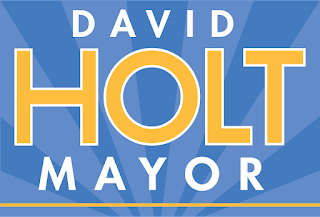 The donations have come from a broad base of support, including 502 total donors from 58 different zip codes in the Oklahoma City metro.

Continuing the growing momentum of Holt’s campaign, the third quarter fundraising total of $150,953 represented the largest quarter yet for the campaign.

“We are deeply grateful for the support we have received,” said Holt. “We still have a ways to go in putting together the resources we will need to deliver our optimistic message to the people of Oklahoma City, but we are inspired by the many donors so far who have committed to continuing the Oklahoma City renaissance.”

The election to decide Oklahoma City’s next Mayor will be held February 13, 2018.   For more information about the campaign to elect David Holt the next Mayor of Oklahoma City, visit HoltForMayor.com.

There was an issue retrieving stats. Please try again later.